Here is the Top manager in Pes 2021 Mobile. Managing a team is as important as signing a new player to your team. There are many factors to consider when signing new players to your team.

I have been playing PES Mobile for the past 3 years. I’ve played many tournaments and watched many other players play PES Mobile in person and online. Many of the best managers (including myself) are extremely good at PES Mobile. I’m going to keep it short and simple so that managers can get to the point quickly.

The manager is the center of the game. For players to have a great experience, they need to understand the manager’s style of play and be able to express this to the players that are playing around them. This can be done in many ways.

Santos can be used for wing play with a decent 4-3-3 formation and wide attacking Zone. He also uses aggressive pressing which can be used to finish your wing attacks in style. His defensive capabilities and also good enough to choose him as your dream manager.

He is also used as counter Attacking Manager with quite good results. He is a very stable manager and is good in other aspects also. You should use very fast wingers like Salah, Mane, Sterling, and a good Center Forward like Lewandowski or Mbappe.

You should use short passes to move the ball down the pitch during your offensive plays. This will allow you to keep the ball and control the game. The opponent will just keep on watching you when you score a counter-attack goal like a beast.
You can use this to surprise the opponent and take the lead in the game. One drawback we see is that we don’t get to play any AMF in his formation.

J. Canto, the best Portuguese Manager who usually attacks wide, the two of making a run to the wing to support better use Beckham there. A well-balanced 4-3-1-2 or 4-4-2, Use Offensive goalkeepers like M. Neuer.

J.Canto uses 1 DMF and 2 CMF in his formation along with 1 AMF. You can also use CMF instead of DMF. The two-striker formation is very good with the option to change to second striker SS provided as well.

J Canto is the best counter-attacking manager especially in online matches he supports Long Pass games with a wide attacking range. Although the old 2020 Santos was the best for this strategy earlier. But if you are good in through Atackng then this is your manager.

A classic  5-2-3 formation with management skills up to 830. You can play with 5 CBs, 1 LM, 1 RM, and 3 AMFs. Overall it’s a good formation for offensive not much for defensive but if you have Varane and Koulibaly put them as your CBs because they are very fast CBs. Like this, you can defend as well. He uses possession game with short passing. 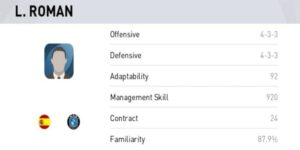 The best Manager in PES 2021 Mobile is L. Roman. The other managers are good too but I m used to L.Roman’s playstyle and J.Laporta, Joachim Low, or R.Martinez are similar to him.

Currently, he uses a typical 4-1-2-3 formation with a good Possession Game. You can use 2 AMF, Messi(101) and Ronaldinho(98) preferably. The goalkeeper should be Offensive (M. Neuer will be best). In Conclusion, he is the best in counter-attacking with false 9 formations.

Well last but not least Every manager is good until you lose the game😂
“Do you use a better Manager? Comment below we’ll add your manager :)”-